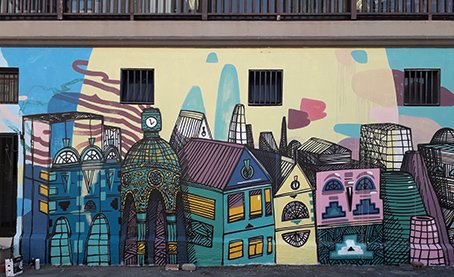 Wayne grew up in Mitchells Plain until the age of 11 in 1992, and later moved to various other areas in Cape town - Mowbray, Steenberg, Muizenburg and later finished high school (2000) and a 3 year course at AAA school of advertising in Johannesburg(2003). It was during this time, that he started doing graffiti and later relocated back to Cape town in 2004, and worked for a few years in the advertising industry gaining invaluable knowledge to later start a career freelancing graphic design and street art murals.
During this time he created Conform, which was his way of bridging the gap between street art and graphic design.

During 2004 - 2009, juggling a full-time career in advertising, as well as gaining ground as a graffiti artist he created and managed hip hop events at Zula, in long street, Arm Chair Theatre in Observatory and a few Park Jams in Mitchells plain. Working with artists who have now become household names in the independent music scene - Niskerone, Sibot, Marcus Wormstorm, Ben Sharpa & Isaac Mutant.

He’s first few exhibitions included 2 group shows at Circus Ninja 2005, and Whatiftheworld gallery 2006. 2010 Adidas World cup group exhibition in 2010 at Woodstock Exchange.
Long board group exhibition at Bonafide - Long street in 2009 and at Worldart Gallery 2017 and 2019. In Dec 2015 he featured work at the bustling and vibey fest Artmode in Woodstock at The Palms.

Wayne’s work at Rocking the Daisies’ Converse event in 2013 and painting the entire underground parking lot of the Verde Hotel with a few prominent graffiti artists where personal highlights of that year. In 2015 - 2016 he coordinated and created artwork with well known street artists, and completed many works for Myciti Bus stations in Mitchells Plain and personal works for 2 of Myciti’s Northern suburb bus stations.

He’s been featured in international publications as well as local magazines and newspapers (2006 present day) - Including but not limited to - Graphotism (UK), Beautiful Decay (USA), Cape Etc, Cape Times, Blunt magazine & One small seed to name a few.

My work is a mix of 3 main subjects - character drawing, plants and
3d shapes and structures I’ve coined as ‘architexture'

Architexture, is about deconstructing and simplifying
shapes and building blocks, using detailed linework.
As an artist who rarely uses references, one starts creating
and inventing ‘buildings’ and structures that do not exist in real life.

This stems from a passage I read in a book, (too long ago to remember)
that if humans enjoyed their jobs, the world would be constructed in a
completely different way. (buildings, roads, general infrastructure
and services etc). That being said, this might be a glimpse into what
buildings might look like, when you actually enjoy constructing
and working with shapes without any brief, budget, deadline or client needs.

Many people may know my journey over the past 20 years, as an artist in
the industry or my involvement in graffiti art. If you do not, now you do.
It is probably the most competitive artform, styles advance on a daily basis
worldwide. All you can do is zoom in on your own work and compete with yourself.