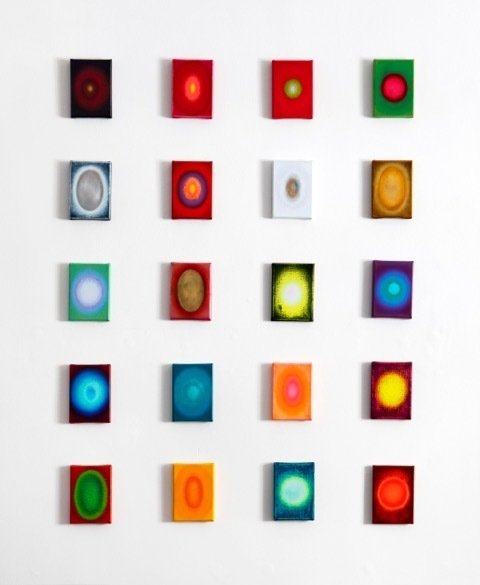 Tracy Payne (b.1965) lives and works in Cape Town, South Africa. She graduated from the Michaelis School of Fine Art at the University of Cape Town in 1987.
Selected solo exhibitions include: Fumbling Towards Ecstasy in 2013 and Muse in 2011 both held at Barnard Gallery; Sacred Yang in 2007 and Sacred Yin in 2005 both held at STEVENSON; Post Tokyo in 2004 held at Irma Stern Museum and Flashback in 2001 at Joao Ferreira Gallery. Her debut solo exhibition Hush Hush: A Love Story was held in her studio loft apartment in the Bo-Kaap in 1998.
Recent selected group exhibitions include: Winter at Everard Read/CIRCA, Nano 1.3 at Barnard Gallery; Urban Archaeology at DAOR Contemporary: For the Love of It at Pop Up Place, all in Cape Town in 2019; Regroup held at Gallery 196, Cape Town in 2018. Colours held at Imibala Gallery, Somerset West in 2017.
Between 2008 and 2014 her work was shown regularly at both Cape Town and Joburg Art Fairs.
Payne has been invited to participate in a group show MERDELAMERDELAMER, curated by Kendell Geers, at Mario Mauroner Gallery, Vienna as part of the “Curated By” Festival this September.
Payne’s work forms part of numerous private and public collections such as the Luciano Benetton Collection in Treviso, Italy; Hans Porer Collection in Switzerland; Spier Art Collection in Cape Town, South African Department of Public Works and South African Fruit Exporters in Cape Town.
Payne has worked form various studios in Cape Town, as well as in Johannesburg and abroad from time to time. Conducting her own residensies has had a great influence on her work, noteably Berlin and Barcelona in 1988/89, New York in 1995, Tokyo in 2002 and Dharamkot and Khajuraho in 2012.
In 2014 Payne moved her studio to 196Victoria, a beautifully renovated Victorian building in the heart of Woodstock . For the following four years, she divided her time between painting and teaching art. Payne is presently working full time towards her 9th solo exhibition.

The two compositions of small oil paintings I am presenting come from my relatively new and ongoing exploration into the language of primal form and color which I began during a period of great loss, separation, illness and injury. It is easier in retrospect to acknowledge the events and recognize the influences that led to my shift from figurative painting to a more abstracted symbolic language.

In August of 2014 I was unable to stand and paint, let alone climb a ladder or handle large canvasses, I had to sit down and scale down. I reduced the scale of my paintings so dramatically that they fitted comfortably in the palm of my hand. This allowed for a greater intimacy between my work and myself to arise. I became more aware of the canvas as a whole, as a three-dimensional object with its front surface, sides and back. I took great care in preparing the ground upon which I would eventually paint. In a sense it was like working with the skin and bones of the painting. With most I applied layer upon layer of oil prime, which I sanded to a smooth alabaster-like finish. Sometimes I applied (imitation) gold or silver leaf to the smooth ground. With others I stretched fine silk or heavy Polish linen over the canvas and then primed lightly to leave the weave apparent. The sides are an extension of the painting and so I intentionally chose to leave these small works unframed so as to enhance their three dimensionality and physical vulnerability.

Also around this time I had begun to tire of the figurative narrative of my paintings and in painting in general. I found myself drawn more to my palettes, to the mass of small ovals of colour I create when I mix my oils. I began to look to artists working in different forms of abstraction; the American Color Field painters caught my attention, I discovered the Tantric Paintings of 17th century Rajasthan. I fell in love with the light and space in the work of James Turrell, and resonated with the simple yet powerful sculptural forms of Anish Kapoor.

Eastern spirituality has been a consistent thread through my work since 2002. In 2012 I took up residence in India for three months. My pilgrimage was as much for spiritual reasons as for artistic inspiration. I visited shrines devoted to Hindu deities, some humble and intimate, hidden in a back street or under a grove of trees, others grand and ornate, like the temples of Khajuraho with their incredible Tantric sculpture encrusted walls. On the streets I was bombarded with colour, dazzling sari-clad women with sparkling bangles, bowls of bright pigment powder, garishly painted deities. No colour is taboo.

I have always found the symbolic and emotive qualities of form and colour fascinating. Forms and patterns follow geometrical archetypes symbolic of the underlying metaphysical principle of oneness, the inseparable relationship of the part to the whole. Colour touches the heart and soul in a similar way that music does. Each has a particular hue, tone and frequency and has as much ability to uplift and heal, as they have to depress and disturb. The relationship colours have with each other and the resulting feeling states they evoke also fascinates me. Some harmonize beautifully whilst others create dissonance in their contrast, some ‘dance’, literally vibrating when they are juxtaposed to one another, some move forward whilst others recede, some push us away, others draw us in.

When I paint I enter the timeless space of meditation. For me these small paintings will forever remain fragile relics of a time of healing my mind, body and soul. And to others I offer an intimate experience with surface, colour and form that I hope ultimately invites spiritual contemplation.