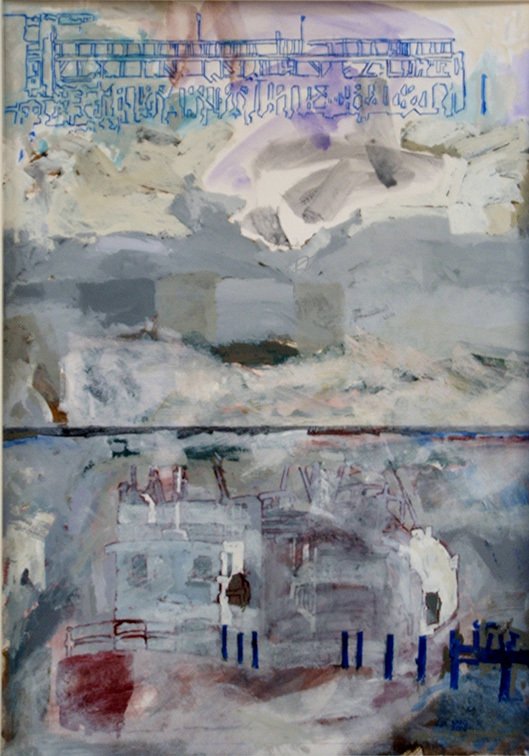 Formerly professor in art history and fine art at the University of KwaZulu-Natal.
Previously taught at the Universities of the Witwatersrand and South Africa, and Natal Technikon.
Participated in approximately 50 group exhibitions and 14 joint or one-person exhibitions, principally in Durban, Johannesburg and Cape Town.

Landscape (including maritime studies), still life and the figure are among the most traditional of genres in painting. King’s work attempts to squeeze something anew out of these traditions and find contemporary approaches to and meanings in the subjects depicted. Although founded on direct observation, the work hovers between the subject found and the subject imagined. The landscape-based paintings refer to the ways in which any given section of the physical environment reflects its histories of alteration, possession and intervention. How places and objects are given meaning and how this meaning is governed by viewers’ experience of place and objects is a part of the larger subject matter.

The paintings draw on a combination of identifiable elements and loosely layered and excavated passages of paint to convey the unruliness of the environment and its containment through the geometry of human occupation. The Littoral series, for example, is based on how piers frame the link between sea and shore. They tend to appear fragile, skeletal, notwithstanding their robust presence. They explain the history and demarcation of the sites they occupy. In the Mid point series, based on the land around the Harrismith area, signs of activity contrast with the deceptive timelessness of the bastion-like landforms. These natural markers punctuate the order of agriculture and industry; seemingly constant, they are in actuality impermanent.

Historically, still life has similarly reflected histories of possession and display. The objects depicted have not, however, always represented valued belongings. Utilitarian items of domesticity and labour, universal and ahistorical in appearance, convey a world of work. Such objects tend to engage each other across cultural bounds, and show their signs of usage. They might become inventories of communal identities, and acquire an unexpected monumentality.

In as much as the paintings are chronicles of spaces and events, they reflect the history of the painting itself through a process of scoring over and revealing underlying applications of paint. Pictorially, no particular elements of the paintings are given undue prominence -- backgrounds, foregrounds and objects are accorded equal importance.