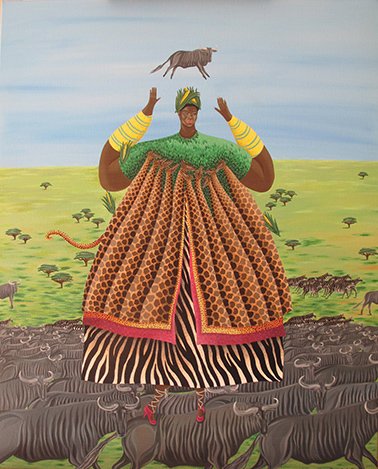 Tanya was born (18/12/1964) and grew up in Cape Town. She attended Wynberg Girls’ High School where art was her favourite subject. Noticing her incredible talent, she was encouraged by her art teachers to pursue the arts after she matriculated. She studied at and obtained a BA in Fine Arts/ Graphics from the University of Stellenbosch in 1987. Her art lecturers, Niki Daly, Paddy Bouma, Paul Emsley, Larry Scully, Hardy Botha and Cecil Skotnes had a huge influence on her art and encouraged her to explore her imagination with the use of different mediums and techniques, e.g. woodcut, lithography, silk screen, etching, mixed media, pencil, scraper board and oil paint.

Tanya specialises in gouache (a water-based paint) and acrylic. Her work has been sold to both South African and overseas art buyers.

She has done illustration work for Cosmopolitan and Fair Lady magazines amongst others.  She worked for Leisure Hour, producing book catalogues in the 1980’s, doing layout work, illustrations as well as photography.

Tanya, her husband and three children, lived in Montagu in the Klein Karoo from 1990 to 1996. This is where she started her personalised paintings after being commissioned by Sylvia Krige, wife of South African artist Francois Krige, to do a painting for her nephew, a film producer, living in New York, USA.

During her time in Montagu Tanya became close friends with Inger Welz, the wife of South African artist Jean Welz. Inger had a huge impact on Tanya’s life and encouraged her to paint as much as possible.

Marlow Walters of the ‘Tuscany Gallery’ in Montagu, exhibited and sold Tanya’s paintings while she was living there.

Tanya had an exhibition in Franschoek at the ‘Art de Vivre Gallery’ and the owner, Marina Todd, had this to say about Tanya’s paintings:

‘Her unique style flows out of traditional African folklore themes. Joyful, exuberant and dreamlike, the detailed images that fill her landscapes and portraits bring to mind the fruitful, abundant land in the midst of change that is the inspiring, modern renaissance of South Africa.’

Tanya exhibited seven of her painting at a South African Art Exhibition held at ‘The Studio’ in Kings Road, Chelsea, London. All seven sold. Six were bought and brought back to South Africa where they are still exhibited at the Twelve Apostles Hotel, Camps Bay, Cape Town, South Africa.

Tanya has done several commissioned paintings for a local interior designer as well as commissions for a private family to showcase the unveiling of their new home in Australia.

My creations are spontaneous and incorporate elements of nature, animals and humans in a tranquil setting. I make use of bold images and symbols that offer interpretation rather than a reflection of the natural environment. I like to juxtapose the unexpected which appears normal to the viewer. My paintings are filled with meticulous detail which pulls the viewer into a peaceful world. My art stems from a deep love of texture, colour and patterns and the use of a 000 brush to clothe the animals in their fur and the figures in their layers of patterned, colourful clothes.

Although I have explored different mediums and techniques, I am currently enjoying painting with acrylic on canvas.

Art is my passion. I am inspired by people and nature with its diversity. A painting is successful if it can bring my viewer hope and joy in a world of turmoil.