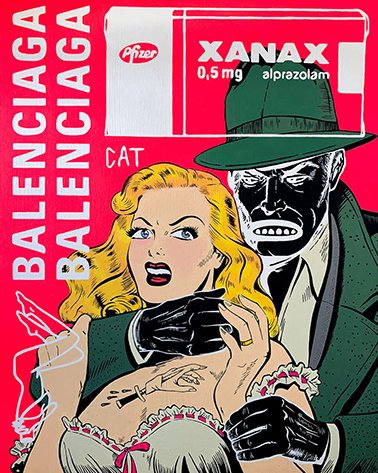 Shaun Francis is an artist and designer, He was born in Johannesburg, South Africa on the 28th of March 1988. Having worked in the design industry for the past decade, Francis has recently opted to work independently to focus on his fine art.
In 2011 Francis graduated with his BA (Hons) in Information Design from the University of Pretoria. Francis has participated in numerous group exhibitions in Johannesburg and Pretoria. He was the recipient of a merit award at the 2016 Sasol New Signatures, and has placed as a finalist in numerous art competitions, including the 2017 & 2018
Absa L’Atelier awards.

Shaun Francis’ artworks form a visual enquiry into the politics of representation. Francis employs a unique image transferal technique to incorporate visual references of popular culture, classical Christian iconography, and colonial depictions of black and white citizens in a single composition. Seamlessly re-working these transfers with acrylic paint, and editing visual elements from one reference for use in another, Francis ‘recasts’ the dystopic South African past within the present, drawing attention to its impact in our contemporary every day. As a white, male South African citizen, Francis’ work is a visual reconciliation, an ironic self-reflection of a truth continuously eluded, and a visual interrogation of a political past within which his own identity is implicated. His work can thus be read as a sincere strategy to unmask political correctness in order to interrogate issues of self-identity.