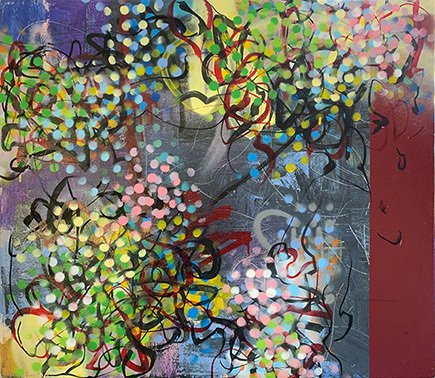 Selvin November (b. 1969) was born in, and still lives and works in Cape Town. He completed a Diploma in Art and Design at Cape Technikon and was awarded a three-month residency on Robben Island in 1996. His latest solo exhibitions were The Portrait Speaks at the AVA Gallery in Cape Town in 2008 and Young, Free and Single, as the Festival Artist at the University of Stellenbosch Woordfees 2019. He has participated in numerous group exhibitions - the most recent being a group show at the AVA gallery, entitled, Salon Cape Town, in 2018

I’m an artist who explores socio-political issues such as Globalisation, Identity and Memory, utilising a visual language to express my ideas onto a painted surface. My current work explores the notion of Freedom and its binary Slavery, Production and Consumption and addresses the conditions of economic access in the contemporary Art World and society at large. The work investigates ideas pertaining to the notion of what the role street culture places in our current socio-political space, and taking to the streets as a platform to voice your grievances.
Furthermore, the youth, more then ever, are subjected to the forces of globalization. Allowing the global marketing machine to enslave the youth to either brands or trends, using the media as its main vehicle to sell their products. Street culture has always been a strong force to counter mainstream conventions.
My current Abstract work presents me with the space, to express my ideas using abstract language of line, form and colour. It was Immanuel Kant, who said that: “An important criteria for art is free play of the imagination”. The idea of freedom can only be attained if you believe in yourself as an individual. I employ elements of free form, which acts as a metaphor for freedom in my work. The bars in my work represent enslavement, which represents the idea that you are imprisoned within the confines and rules of the system, socially, politically or economically. The use of expressive line drawings serves as an additional metaphor for freedom, thus creating tension, which in turn creates movement within the work.

My favourite tool is the brush, and I have a huge selection of brushes, which I use for different applications. All the different brushes allow me to achieve various mark making techniques on the canvas. The medium that I use the most is oil paint, which is so versatile; you can mix it with other mediums such as Paint medium, turpentine and stand oil to manipulate the consistency, fat or thin, and for glazing one layer on top of another. I love mixing my own colours and enjoy the tactile feeling of applying those paints onto the canvas.

As far as I can remember the idea of Freedom, which is a multi faceted construct that extents beyond political ideology, has always been important to me. My very first memory of art making is when I was 7 years old, when my art teacher Mrs Sylvester, asked the class to draw a chicken as an exercise. I ended up deciding to draw the chicken using as many colours as possible, which impressed her, and made a huge impact on my decision to become an artist. It was a clear defining moment, I realised how important it is to inspire people with my art. It was at this age of 7 that I become politically aware, due to the riots of 1976, which literally happened on the streets. The call for freedom was on the forefront of the political battle, at the time, and the word, FREEDOM, was visible all over on the walls in the form graffiti. It was later as a teenager in the 80’s that I realised how powerful a visual image (text) can be, and how loaded to the word Freedom can be within the socio-political context of the time. It was then at that point that I became politically conscious and my later works reflected that conditioning. My goal become to create artworks that will inspire, move people emotionally and give them something to think about.