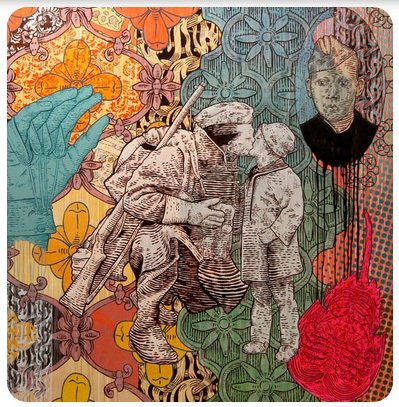 Peter was born in 1986 in Krugersdorp, South Africa, and currently resides in London. He has worked on drawings and artwork from a very young age. For the most part an autodidact, his training has also included an apprenticeship in a puppet theatre and with a set designer working on theatre productions.

Peter is a fourth-generation South African of Dutch descent, who grew up as part of an isolated, Afrikaans-speaking community during the collapse of the apartheid regime and the transition to a democratic, multi-cultural government. As a child experiencing the regime change, he observed the rapid transformation of the country’s collective social and economic norms and the conflicted and often clumsy responses to those changes.

His observation of the amorphous historical narratives told by the successive governments ruling South Africa has been a major factor in his development as an artist. He uses his artwork to pose questions about the construction of the narratives of power and authority, the intersection of individual and national identity and the suppression and celebration of the ugly and unacceptable.

Peter has sought out what it means to be African while traveling from Cape Town to Cairo on public transport. He has also lived and worked in Moscow, Russia and Varanasi, India, and there is a strong Russian and Indian influence in his artwork. Peter has recently worked in Cairo, Egypt doing research and making drawings.

I am interested in patterns. Thoughts occur as patterns; our lives are made up of events that occur as repetitions; history is repeated in patterned compositions. I am fascinated by the way nature forms patterns, even those that are grotesque. When people and animals are born deformed, the deformity is symmetrical, harmonious. There are patterns in deformities, which imbue them with grace and beauty.

I try and draw attention to the beauty of the things society tries to hide, the beauty in the uncommon and unusual. I grapple with the way in which what we consider benign and banal today might be in the future, or have been in the past, considered pathological and bizarre. My work draws attention to the unusual in order to question our current sense of normality, which is temporal and malleable.

I study the way history is written; historical narratives are often cartoonish in the way that they are portrayed to drive political and social agendas. I am particularly fascinated by the obsession and energy spent on war, which is a bizarre and defining characteristic of our species.

Living in Egypt, India and Russia has acted as a counterpoint to my experiences in South Africa and to my experience of western narratives in general. I try to place various constructs of gender, sexuality and disability within the larger patterns I have found, in order to show different ways of being to the viewers of my artworks.

Peter designed two coins for the South African Mint, one a circulation R2 coin and the other a commemorative coin.