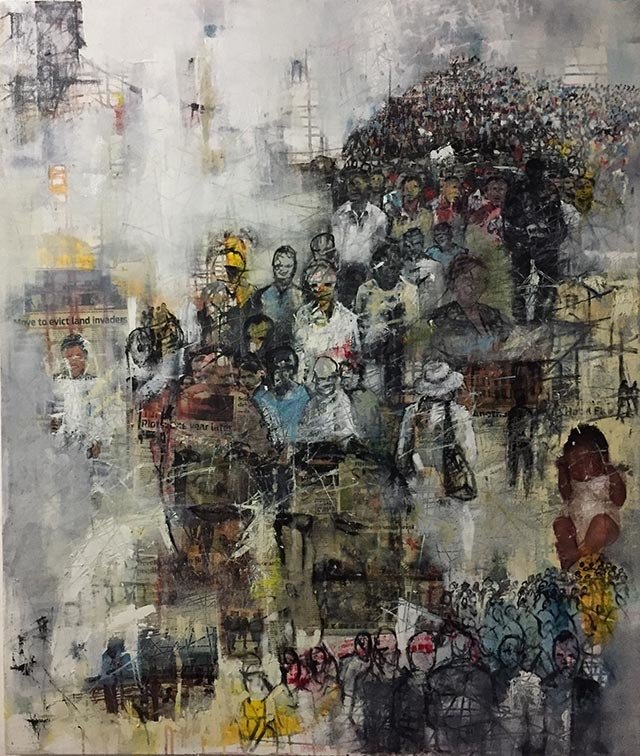 Obert was born on the 3rd of April in 1980 in the rural Mt Darwin in Northern Zimbabwe. During his early years he became interested in drawing through assignments given to him at school. When he became friends with an artist, Tichaona in 1999, he realized that he wanted to become one as well. Through minimal information supplied by his friend, Obert started visiting galleries and studying the different arts around him. In 2000 he saw the work of a Zimbabwean artist, Tendai Nhavira. This inspired Obert to start painting. From the first moment of taking painting seriously, Obert knew that he was fulfilling his destiny. He worked hard, and through some tough times, on this new journey. From the very beginning his work was highly regarded by the galleries, both in Zimbabwe and South Africa.

Until 2012 his works depicted the native scenes around him in Zimbabwe and Southern Africa, in vibrant colours and bold style, and quickly found their way into homes and hearts, but after a year sabbatical he returned in 2013 with a new concept and point of reference for his work. Under the mentorship of Jenny Jackson, local Hermanus artist, he took his work much more seriously, reflecting the moods of his subjects at various times of interaction with a brutal honesty. He also added still lifes to his repertoire. Jenny taught Obert colour use and the art of balancing a composition, and supplied continuous stream of art books for him to study and discuss. His current body of work reflects a more complex world that he views, with the traditional and rural surrounds now in tension/conflict with his western surrounds and lifestyle. As he is more prone to develop the western and modern surrounds since it is new and unfamiliar, his works now also reflects this environment more accurately and through exploring eyes, which makes for very exciting imagery and painting.

His current technique:
With certain compositions he has a clear idea of what he has to do and no reference material is required. He gets directly involved with the process and executes the work. With other subjects, especially those experienced more emotionally rather than visually, he has to first do a drawing on paper and then translate it to oil on canvas. His free style allows the behaviour of his paints and art materials to also influence the process, while he stays focused on the main subject. His unique scratched finish is prevalent in all his works, and a highly recognizable signature. This he does as he completes the work, sometimes with closed eyes, for knowing the subject so well, and with it emphisises the energy field or “aura” of each character or body.

With the new are of his creative expression, sculptures as a 3 dimensional concept, is also explored. Drawing subjects from his early childhood, since sculpture is a new birth in new material for him, he adorns the wooden pigs, roosters, geco’s and more, in oil, with his intense storytelling.

Obert joined Rossouw Modern in 2004 and since then his work has been taken up in major galleries across Africa, including the Zimbabwe National Gallery, and acquired by collectors of modern artwork. Obert had his first solo show with the Rossouw Modern in 2006 at Groot Constantia, and participates regularly in group exhibitions nationally. He was part of Rossouw Modern Fynarts, THE Exhibition, in June 2017. In 2004, Jozua asked Obert at his first interview to sum why he became an artist, and his response is still so relevant today. “ What I see and feel is art, so I paint!”

I am a person who gets fascinated by almost anything and everything. These fascinations and curiosities are pertaining to the artistic mind within me absorbing information and unleashing itself. My influence range from socio-political abstract expressionism for its liberty. I believe that it is crucial for any artwork to stand alone with nothing but a voice of its own. Mood is an integral part of the work this achieved through the use of strong tonal contrast and what I call visual silence. Visual silence is an area where the eye can rest. The eye is naturally drawn to detail and can be overindulged - the area of visual silence provides the eye the resting place it needs.