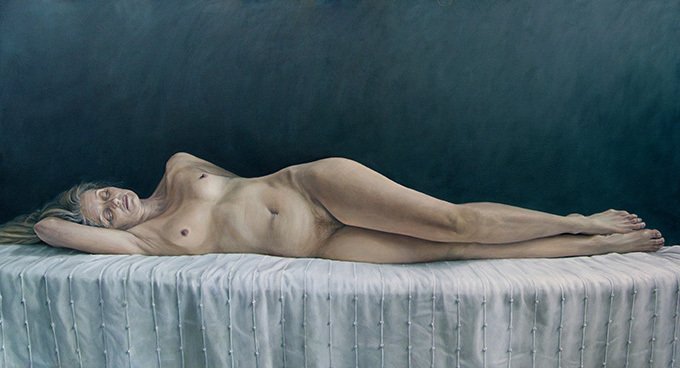 Heather Gourlay-Conyngham was born in Durban in 1956 and spent her early years in Westville, outside the city. Having acquired a Bachelor of Arts in Fine Arts degree from the University of Natal and a Higher Education Diploma from the University of South Africa, she combined her career as an art teacher at various schools in KwaZulu-Natal with that of an artist, but in 2012 began painting full-time at her home in Hilton, outside Pietermaritzburg. Since then she has participated in 12 group shows, has had four solo exhibitions, and in 2013 won the first Sanlam Portrait Award.

he unifying thread throughout my work is humanity, expressed either in realistic depictions of people or in works that reflect the consequence of human action. While I am usually associated with portraiture, my paintings have almost always depicted people, often with the figure and its context stripped to their bare essentials. More recently, my compositions have included objects and complex natural backgrounds that assume an allegorical role and profoundly affect the manner in which the figure is perceived.

In my artworks, figures, plants, animals and inanimate objects are acutely observed and painstakingly rendered, and instilled with tension and an innate energy. An example of this, in my 2017 exhibition at the Everard Read Gallery, was an installation that comprised components of mediums other than painting and demonstrated that, whether painted, drawn, cut or assembled, all my works display fine, almost obsessive detail and intricacy.

A fascination with the human condition underpins my work. It is important for me to express in a palpable manner my empathy and respect for my subjects. These may be family or friends, or people whom I have come to know while working on a commission, or animals and plants. Evident in my more recent work, including my 2017 installation and my current seascapes, is my concern about the destructive nature of humankind. These works show that while I seek beauty, my view of humanity is not uncritical.