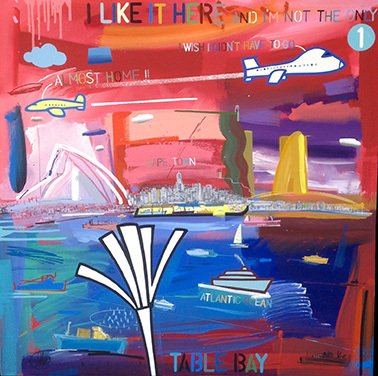 David Kuijers was born in 1962 near Johannesburg, South Africa of Dutch Immigrant parents. He completed his schooling at the Pretoria School of Art, Music & Ballet, with a distinction in graphic art and the best painter award for 1980. He did 2 years military service at Youngfield in Wynberg, Cape Town. A brief period as a signwriter, was followed by enrollment to study Graphic Design (majoring in illustration)  at the Cape Technikon. He received the merit award as top student upon graduating. For 10 years David freelanced as a designer/illustrator to aid his efforts at becoming a full-time artist, which he achieved in 1999.

He is married to the artist Dina Kuijers and they have 3 children, two of whom are also artists and the third who opted for a real job.

If I have to be honest my career choice was based on a desire for freedom rather than a means to convey valuable ideas or express some deep feelings. As a child I spent a lot of time in the wild and it represented an independence of thought and freedom of movement that I cherished. As ‘the boy who can draw’ I also sensed a separateness from my peers and adults that was at once disconcerting and appealing. As an adult it translated into: either you work (in the corporate sense) or you paint. A difficult path but not a difficult choice.

My biggest early influence was the French painter Raoul Dufy. His paintings have a vitality that to me is the visual arts equivalent of perpetual motion. The energy he painted with was transferred rather than expended in the process. The energy is still there – the paintings are “radio-active”. Art made by young children sometimes has this same quality and can be equally captivating and energising.

My own rationale, with this in mind, would probably be to make art that in style and content, hopefully has some of that same positive charge.