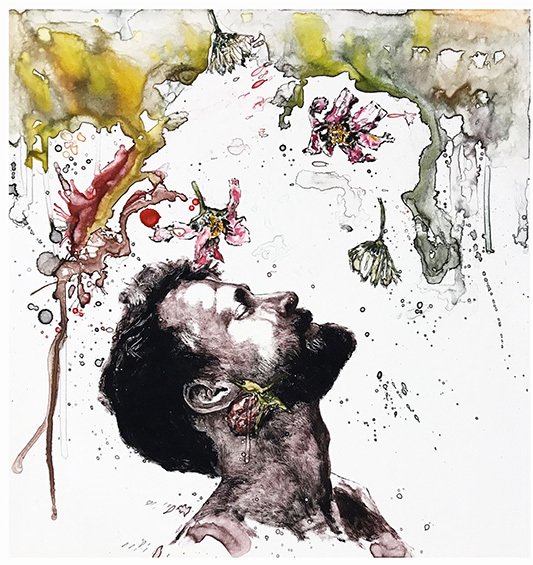 Diedericks has exhibited extensively throughout Southern Africa, as well as internationally. His work has been exhibited in the USA, China, Croatia, Japan, Finland, Argentina, Tanzania, Spain, Germany, Turkey, Poland, Belgium, England, Sweden, South Korea, and France, where he worked, as artist in residence, at the Cité Internationale des Arts in Paris on nine different occasions since 1994. In August and September 2020 Christiaan will complete his tenth residency at the Cité des Arts in Paris.

Diedericks has also lived and worked in New York after receiving the prestigious Ampersand Foundation Fellowship in 2006 where his work was exhibited at the gallery 5+5 in Brooklyn to critical acclaim in the New York Blade newspaper, in December 2007. Diedericks, amongst his many achievements, has been awarded more than thirty artist’s residencies and sojourns to date (e.g. Frans Masereel Centrum, Belgium; The Halka Art Project, Istanbul, Turkey; The Venice Print Studio for large format printmaking, Italy; the Il Bisonte Printmaking Studio in Florence, Italy, the London Print Studio and the Guanlan Print Base in Shenzhen, China). The artist travels extensively, sometimes up to three times per year. Diedericks regularly show his work on international printmaking biennials. In 2015 he featured on the Beijing Biennial in China and in 2017 Christiaan represented South Africa at the 4th International Silkroads Art Festival in Xi’an, China.

The artist’s work is in numerous national and international collections – in the collection of MOMA (The Museum of Modern Art) in NYC, USA to name only one.

In many ways I aim to ‘rewrite’ history in my work and the dominant sense of self-awareness that informs most Western art practices. I am trying to present contemporary issues such as Difference as timeless, by situating my vocabulary of images and themes in an organic flux of dreams, history, news, commercial detritus, hyper-reality, and unvoiced feelings and forces of biological nature/desire.

I always aim to stay clear of any literal explanations of any specific work of mine, as I believe that no work of art or “visual text” is ever complete. In my opinion the ongoing debate by viewers as well as the debate between the viewer and the artist and hence possible new additions to the original meaning of the “visual text” by the artist will continue to enrich any work of art.

In the light of the above, my latest works are aligned with recent ideas about meta-modernism. According to cultural theorists Timotheus Vermeulen and Robin van den Akker who introduced the concept “meta-modernism” in 2010, Meta-modernism is “the integration of experience with innocence and wisdom, of reason with sensibility, of past with present. It is a search for the meaning and beauty of the present. Meta-modernism integrates the lessons of the past to enrich the present.

It transcends national boundaries and ethnic divisions to identify the determinants of the subject in the twenty-first century. It is poetics of tolerance, appreciation, and acceptance of the other, with openness and kindness.”

My most recent solo exhibition In search of a new king at The Melrose Gallery in Johannesburg (May 2019) investigated Colonialism in Africa and especially the impact of many years of Apartheid in my own country: South Africa. According to the Oxford dictionary online, Colonialism is “the policy or practice of acquiring full or partial political control over another country, occupying it with settlers, and exploiting it economically” or in other words according to the Collins dictionary online as “the policy and practice of a power in extending control over weaker peoples or areas”. As a white male South African artist, I am a descendent and benefactor of the European Patriarchs who colonised Africa, and I need to emphatically state that I personally believe that colonisation was the worst thing to ever have happened to the people, cultures, societies, land and economy of Africa.

My interest in Colonialism was fuelled by the commonly peddled myth, which exists in the minds of most - that being the one relating to the primitive and savage Africa that the colonising Europeans “discovered”, civilised and then developed. Of course, much of this commonly accepted those same colonialists have written history, but the truth is that large portions of Africa were not that far behind Europe at the time that Europeans began arriving.

Ideas about “post-truth” as our current global reality, resonates very deeply with me.