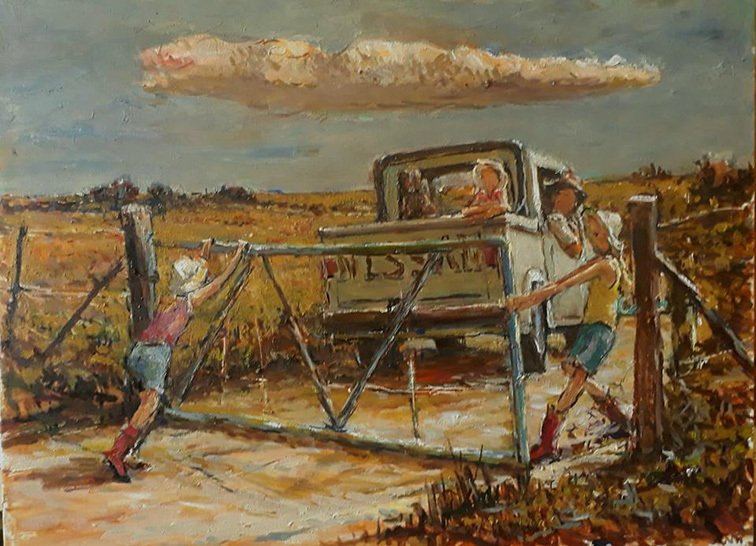 Adriaan Boshoff Jr.(S.A.1967) is an artist with old values who spends most of his time in his studio or with his family. Adriaan works 100% from photographic memory and uses no models or photo references. It takes a lot of concentration to work in this manner and the smallest distraction could make him lose the mental image, and then the painting ends up in the dustbin.
Adriaan was a lifelong student of his father, the well-known South African Master Impressionist – Adriaan Boshoff Sr. (1935 – 2007) who died from cancer. Adriaan Sr. was much stricter with his son than with any other student he assisted from time to time. Adriaan Jr. was forced to do pencil sketches and figure studies for years before he was allowed to do oil paintings. His father made him copy the work of an artist he admired and then made him destroy the painting with the words: “You have learnt nothing from copying another artist. Now show me what YOU have to offer the art world.”
Adriaan Jr. chose not to walk in the footsteps of his father, but to become a leader in his own right, walking the challenging road by searching for unique themes and creating his own style. He presents his paintings in his own unique style of modern impressionism. His work is filled with humorous interpretations of life that attracts many younger and modernist collectors, but he also caters for those who prefer classic themes. His adventurous spirit is prominently visible in the manner he composes his work. This entrepreneur is a man of action who strives also to convey movement on the canvasses and wood to which he applies his oil strokes and charcoal lines. The dynamics of life find reflection in the liveliness of art.
Adriaan made art his full time carreer in 2007 after his father passed away, although many of his paintings were sold to collectors before then. His sister, Louise, was the only art dealer who was bold enough to sell his modern themed paintings to a market that was hungry for someting truly original.
Adriaan spent his highschool year is Middelburg. He raised his children in Hartbeespoort, North West Province, but realised that the buzz of the growing town did not allow him to focus on his work. In December 2018 he moved to a remote farm in the Free State, located between the small towns of Brandfort and Theunissen. Adriaan now enjoys the peace of the 350ha farm where the only distactions are the distant passing trains, beautiful landscapes and neighbours teaching them the joys of farm living like counting sheep or floating down the canal on a tactor tube.
Adriaan’s work is very saught after and since 2014 his artworks are sold out on a constant basis. Using galleries, exhibitions and social media as his marketing platforms, most artworks sell within minutes after completion. His themes are modern South Africa and sometimes nostalgic memories from his youth. He loves painting figures, but do not shy away from any theme and is always looking for a new challenge. He works in oils and enjoys using high quality handmade paints by artist friend Joe Joubert. Adriaan finds it very amusing when old fassioned art dealers who condemned his themes in the early years phone him to order a painting due to client demand.